Skip to content
– Cristiano Ronaldo is reportedly willing to reunite with Jose Mourinho in Juventus
– Reports from Italy claim that Ronaldo has asked the board to employ Mourinho
– Max Allegri left the Biaconeri at the of the season after five-years with the Turin giants
Cristiano Ronaldo has surprisingly asked Juventus to employ his fellow countryman Jose Mourinho, reports in Italy claim.
Massimilliano Allegri ended his five-year spell with the Biaconeri following their 1-1 draw against Atlanta on the last day of the season.
And with the departure of the Italian gaffer, there will be no shortage of candidates applying for the vacant managerial position at the Allianz Stadium. 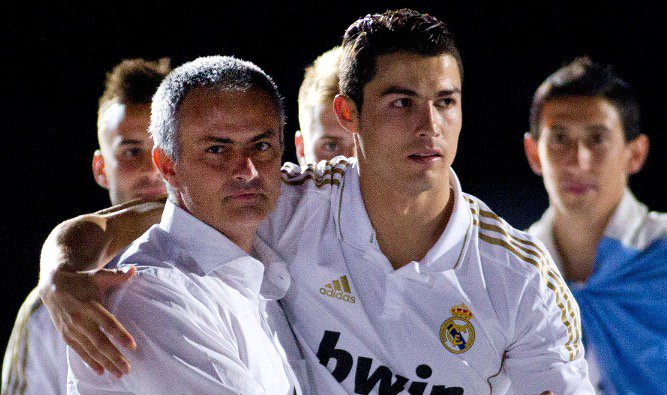 Putting two and two together?

Cristiano Ronaldo has asked Juventus to make Jose Mourinho their new manager, according to a report in Italy

Italian news media outlet La Gazzetta dello Sport claimed that Ronaldo has asked Juve’s board to get the services of Mourinho.
It is understood that the former Manchester United manager could be tempted by offer – having being guaranteed a Serie A title and a strong contender for a Champions League berth.
According to the Daily Mail, Ronaldo also believes Mourinho is a serial winner, having won the Champions League Juve craved for with FC Porto and Inter Milan in his colorful managerial career.

Not just Andrea Agnelli but also Cristiano Ronaldo is against the return of Antonio Conte, yesterday during Allegri’s farewell conference, when a question about Conte emerged. CR7 was seen shaking his head & making a telling grimace when the question came about. (La Repubblica)

La Gazzetta dello Sport stating that Ronaldo has asked the Juventus board to make an approach for José Mourinho. pic.twitter.com/PtTuEkECft

Mourinho will also have the opportunity to go head-to-head with Carlo Ancelotti, a coach for whom he has plenty of admiration. The ex-Chelsea boss has a track record in winning European cup competitions which has eluded Juventus in the last 13 years.
La Gazzetta notes that “two parties are pressing Juventus to take on José Mourinho as their new coach.
One, logically, is his representative Jorge Mendes and the other appears to be Cristiano Ronaldo, who has put their differences at Real Madrid to one side and backs the appointment of his compatriot.”
Meanwhile, it was earlier reported that Cristiano Ronaldo was rewarded with the Serie A best player in his debut season but suffered an awkward moment with the trophy.
The Portugal international scored a remarkable 21 goals and registered eight assists in 31 appearances to help Juventus win the Scudetto for the eighth time in a row.
Share on:
WhatsApp